The rally had 16 rigs at the Canton gathering with 15 at the park and James and Gail Smith at a nearby park. Others attending were: Bobos, Kerchers, Kellys, B. Odoms, Denmons, R. Odoms, Gambles, Phillips, G. Odoms, returning as a new member John Brandon, guests Kathy and Wayne Smart (Kathy is Gary’s sister and his other sister and husband with them), Wayne and Linda Holley and Jerry and Robin Waits (Denmon’s friends), Tammy and Darren Phillips (Phillips’ son) and Linda and Polk Brian. On Friday the Hoovers, Dakes and Krugler joined us for pot-luck after their shopping day making it 39 people for “supper” that night.

Over all we had a variety of weather days for our week including “coat wearing” day, 90+ degree day, beautify clear sky days, rainy day with a little sleet and tornados. Two of the tornados that touched down were on each side of us one was very close to James and Gail. Everyone was on ALERT from our phones to seek shelter. Some of our crew did so in sturdy building and some in bathroom. It was a tense time and we were without electricity throughout the night and the next day the entire town was still without electricity. It was reported that one person was killed and nearly 50 injured. Later reports said that four were killed in East Texas and many more hurt.

We ate at the Mexican restaurant, the Ole Bean and Burger restaurant, and had pot-luck one night. We had three breakfast thanks to everyone supplying breakfast food and Roger Odom, Larry Denmon, and Bill Bobo with the help of others preparing most of the food. Dave cooked hash brown, Norma Odom and Kathy Smart prepared a breakfast casserole one morning with others bringing something else. So you see we didn’t go hungry. 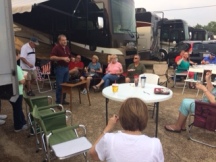 Part of Canton Trade Days building which has acres and acres of buildings and open-air venders. 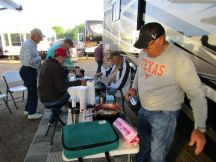 In front of the Old depot museum which housed a train collection and items seen if depots years ago.

Bud and Charline Odom visit as Roger and guests meet in the Canton park.