…. Elkhart style.  The weather forecast called for a chance of rain, so we chanced it.  And were rewarded with a massive downpour.  It didn’t take long for deep puddles to form around our feet, and a move from under the awnings was rewarded with a cold shower.  Nevertheless, we all had a great time and were pleased to be able to gather on the eve of our departure.

Tomorrow we all head for different and new destinations.  Travel safely, everyone, and see you at the next event… whatever and wherever that may be. 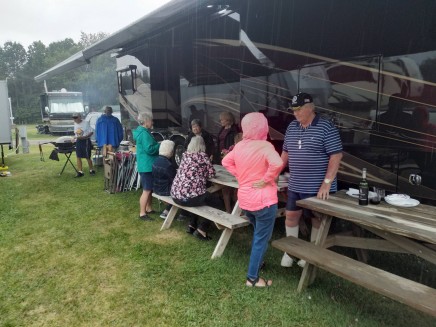 The Elkhart County Fair is the second largest county fair in the U.S.  Parking is in a field with golf carts standing by to take you to the Fair gates.  Inside is a trolley which you can ride to the many areas – vender buildings, exhibit buildings, carnival rides, animals and, of course, interesting fair food.  There are also 275 50-amp full rv hookups & an additional 72 30-amp ones.  I believe they were all filled for the Fair!

Because of the inclement weather, some decided not to visit the fair.  However, the Phillips, Smiths and others did attend the Fair and had a great time even though during the course of the day the tornado sirens sounded and everyone was directed to shelters!  After the “all clear” the Fair activities resumed albeit a bit rainy.  The people were exceptionally friendly & welcoming.  Phillips said, “We’d go again but would wish for better weather!”

When the Travel Supreme company went under in 2008, the motorized assets were purchased by Jayco and the production moved to Middlebury, IN.  Since then they have been cranking out high end motor homes under the name Entegra.  In fact, three of us are now driving Entegras.

Dave Phillips set up a tour of the factory, directed by an old friend Todd Hahn.  We met in the lobby, got our safety vests, hats and radios and started at the chassis area.  There we were able to take a close look at the backbone of these fine coaches.  Then we went inside and got a detailed view how the motor home itself, from the floor up, was  built.

This was most educational for all of  us.  We got to appreciate the work and quality that goes into these fine motor homes.  After the tour, we went to the Rise’n Shine bakery, had a nice lunch and sampled the goodies, including the famous “Amish Crack”, cinnamon/caramel donuts that were oh so good.  After that, we went our separate ways, including a visit to the Shipshewana Flea Market for some of us.

The group gathering in the lobby

Outside at the chassis area

A whole row of Entegra in the making

Not ready for the road by a long way!

On the final assembly line

Groip photo with Todd, our guide

Every year the Wise Doughty School benefit auction is held near Charm, OH. It is way out in the country, but very well attended by locals and visitors. They auction off small items to major furniture items. Some of the furniture is very nice hand built from solid wood.

The parking lot is interesting, with cars, buggies and horses. The auction itself is in a series of tents, and there are multiple auctions going on at any one time. There is lots of food too. Of interest is the chicken grill, 5 racks of chicken, each manned by a volunteer. Every 30 seconds or so every rack is turned to prevent burning.

Overall, a fun event, even though it was extra hot. Below are some pictures. I have tried to minimize direct pictures of the Amish people as it is frowned on by their religion.

There is so much to do and see in this region of the country.  You’ll need months to cover it all, so we split into interest groups so we can all see and visit with what holds our main interest.

Most of us went to the Warther Museum, where we all marveled at the amazing woodwork done almost 100 years ago by Mooney Warther.  The Museum was great, and the grounds peaceful and beautiful.  More than a few knives were sold too.

Others went to Keime Lumber, probably the biggest and best laid out hardware store anywhere.  Still others went to Lehman’s hardware store, much more nostalgia items on display.  Also, shopping for Amish and other local goods was popular.  Then there were the auctions…..  Suffice it to say we all had plenty of things to do.

We ended Friday with a dinner at the famous Mrs. Yoder Kitchen.  Got there early at 4:30PM, there was already a crowd waiting to get in.  Good thing the Gambles got reservations! A few pictures…. 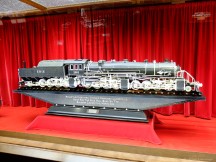 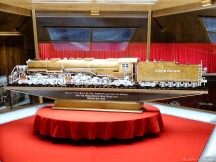 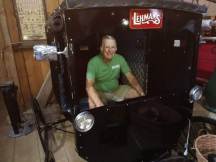 Produce is big in Amish country, and the selling of produce is a big event.  All across the area there are produce auctions, where farmers can sell their goods to retailers, restaurants, produce stands and others.  The produce looks just great!

Tine Hoover was kind enough to share the pictures she took, along with one from Dave Phillips and a short video from John Laninga.

(In Dave’s picture we are holding onions, not ice cream cones!) 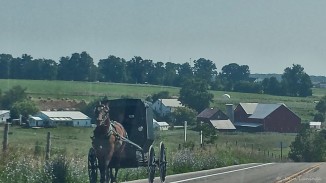 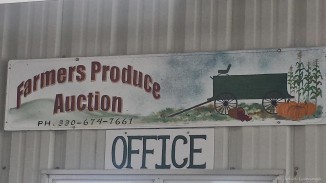 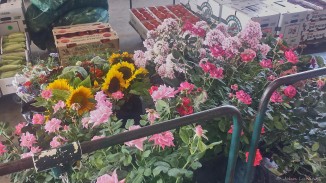 Today was actually an arrival date, and we gathered from around the country.  Mostly the South and Michigan… there was an excellent turnout of some 35 people.  Irby and Judy Gamble did an outstanding job of getting everything ready for us and making us feel at home.

Of course, this requires food, and the women of the group did an outstanding job.  Everything was excellent and there was lots of food left over.  Preliminary plans for what to do the rest of the week were made.

After dinner we gathered in groups, some with a fire, some without.  In any case, the usual tall tales were told and we all enjoyed an evening of companionship. 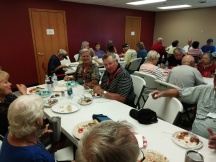 On July 3 our intrepid group went to the Pioneer Playhouse in Danville, KY.

The Pioneer Playhouse was founded by a Col. Henson in 1950 and is the oldest outdoor theatre in Kentucky.  It has been called the “Granddaddy” of Kentucky Outdoor Dramas and  received national attention as the “King of Summer Stocks” in New York trade magazines. Many known and aspiring actors have strode acted on its stage.

Col. Henson built the theatre by acquiring many of the construction materials in unorthodox ways. He once bartered a fifth of whiskey for hand-hewn two hundred-year-old rafter beams and hired prisoners from the local county jail to help him lay the first foundations.  Today the unconventional, hand-built theatre serves a pre-show dinner out of doors and a live performance Tuesday through Saturday every summer.

We thoroughly enjoyed our BBQ dinner and the show “Drinking Habits 2” that followed.  The show was a spirited (pun intended) play on nuns, making wine, and putting on a play to raise money for the local orphanage.  Funny!

We arrived and settled in at Creekside RV Park (Smiths, Smiths, Lezells, Phillips, Laningas).  On Friday we went to the Charlie Daniels concert her in Renfro Valley.  It was an excellent concert, albeit too loud.  But the music was good and the musicians each performed well.

The next night we went to two concerts: a local band to warm us up, and then an excellent concert by Jimmy Fortune.  He was the tenor singer of the Statler Brothers and wrote quite a bit of their music before the band retired.  Jimmy’s music was a mix of country, patriotic and gospel. Although only a trio, the performance was great.

Gail tried to entertain us with some bass fiddle play, only to find out it wasn’t in tune.  Nice try, Gail.